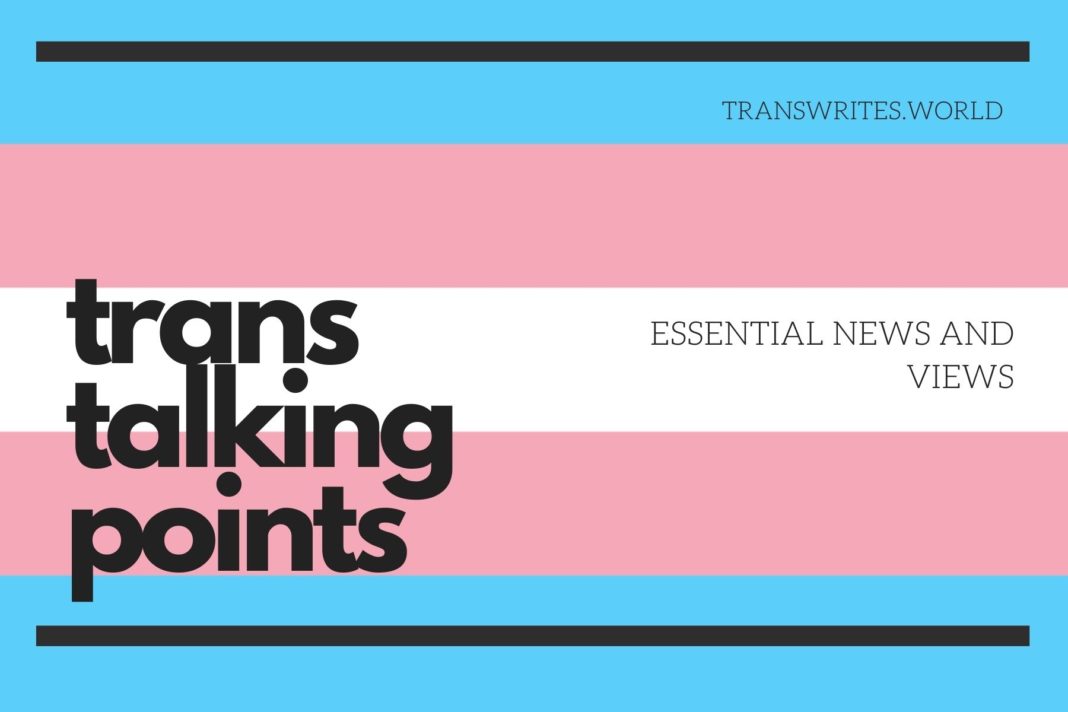 As it has been very quiet in the papers since the death of the world’s largest landowner, I thought it a good idea to have a look at the issues that have caught the attention of trans people and their enemies but haven’t hit the papers yet.

The biggest story that has everybody talking at the minute is the one that involves the white cis het Helen Joyce, her mate, and a butchered progress flag.

Joyce is no stranger to trans people. She is, after all, the one who wants to eliminate every last one of us. Yes, Joyce is the one who called even those who have happily transitioned a ‘huge problem for a sane world’.

As with all these people, Joyce clearly collected her grab-bag of bigotry on the way to her first meeting. So, while it was shocking to see her grinning like she was having the best day of her life, holding a trashed progress flag by the corner like she was afraid to catch queer, it was not surprising.

Straight woman @HJoyceGender, posing proudly with a mutilated progress pride flag, standing over the shreds of the racial, trans and intersex justice elements which have been cut out of it, at the Brighton Kellie Jay Keen event. pic.twitter.com/fdFfjXgD8n 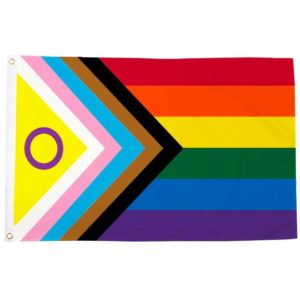 They removed it all. Not just the trans bit. The message was clear. Pride, according to white cis het Joyce, is just for white cis LGB people. And her. Presumably.

I wondered if they had brought scissors to the event that took place in Brighton over the weekend but it seems they had pre-cut the flag.

This wasn’t a spur-of-the-moment-got-carried-away-with-all-the-fascists-speaking type of situation. This was a thought that was considered, pondered, and acted upon. The flag was ordered and paid for and the section cut, no doubt as they sat giggling on the sofa at the thought of how funny they believed they were being.

You can picture it, can’t you?

After the event, Joyce made sure we all knew it was her friend who had pre-prepared the flag as she signal boosted a Nazi.

Yeah she clarified it under this retweet of a nazi pic.twitter.com/evMgmIsXS4

One day, the most talked about trans stories might actually involve trans people. But that day is not today because the next thing we have to concern ourselves with is Allison Bailey’s latest nonsense.

When the verdict was delivered that Bailey had crowdfunded £500k to sue Stonewall only to lose that part of her case, the media and her anti-feminist mates painted it as a massive win.

That's certainly not the impression you'd get if you followed GCs! pic.twitter.com/iAPeIkJpuf

Even though Bailey briefly acknowledged in a tweet that she did not win against Stonewall, in another she said, “My profound & heartfelt thanks to everyone of you who supported me. I did not win everything but I won enough. We did it. Thank you.”

Obviously, with time to reflect and a crowdfunder to start, she has re-evaluated that position and has decided to appeal.

Bailey is appealing her loss against Stonewall.

Garden Court – despite their statement – do not appear to have appealed in time. pic.twitter.com/lCApeaNk0Y

This appeal seems doomed to failure as well. Courts are not Twitter, no matter how much the GCs pretend otherwise.

Garden Court Chambers were completely disinterested in anything Stonewall had to say. They thought Stonewall would bring them lots of business and that was their main reason for joining the Diversity Champions. The idea of GCC listening to the organisation and following their direction is laughable to anyone who sat through the evidence of the initial tribunal.

Still, it will keep Bailey and her pals in the news and Maya Forstater will get more outings in the Daily Telegraph, despite having nothing to do with any of this.

It’s also worth noting that the LGB Alliance are currently arguing in court that the reason they don’t do any charitable activities that actually benefit LGB people is because of a lack of funding, yet Bailey was able to raise £500k for her first go at this.

Who knows how much she’ll raise this time around.

Bailey’s LGB Alliance mate, Bev Jackson, is also claiming that a ‘growing number’ of trans people are speaking up to defend their transphobic organisation.

Reality really isn’t a place they like to inhabit too often.

Back in August, the Mail on Sunday ran a double-page spread on Cathy Boardman. Here was another lecturer suing for being discriminated against because of her views on trans people. She also has a fundraiser (which was linked to in the Mail Online’s digital version of the article and stands at over £15k at the time of writing).

That story was picked up by The Telegraph and The Times but has now been redacted from the Mail on Sunday:

The article that the Mail on Sunday did on Cathy Boardman taking BIMM to tribunal for discriminating against her has been redacted from the digital edition pic.twitter.com/I7JRyXRGTM

It’s not clear why. The online version, which is still up, contains the exact same text as the print version. What I do know, however, is this happens a lot with the Mail in ways it doesn’t seem to with other papers. Or, at least not as often.

The tribunal is set to take place in November, although the exact date is not yet clear.

Certainly a story worth keeping an eye on.

USA – Over 100 activists turned up at a local library to protest a private forum whose speakers openly oppose trans rights for youth. The event was sponsored by the Independent Women’s Network, a right-wing org characterized as anti-feminist by national news media.

USA – A Montana judge on Monday said state health officials made “calculated violations” of his order to temporarily stop enforcing a law that would prevent trans people from changing the gender on their birth certificate unless they had undergone surgery.

USA – Tucker Carlson is openly calling for violence against teachers and LGBTQ+ people: “No parent should put up with this for one second, no matter what the law says. Your moral duty is to defend your children. This is an attack on your children and you should fight back.”

USA – 1,648 titles pulled across 5,000 schools in Texas, Florida, Pennsylvania, and beyond, says a report. The axed texts were mostly novels, often dealing with LGBTQ+ issues or race.

A JK Rowling selfie has become a news item after the Harry Potter author posted one to social media. In which, she is seen wearing a t-shirt targeting Nicola Sturgeon by calling her the "destroyer of women's rights".
Patreon

Kevin Lister, a teacher from Swindon, was fired and is now taking legal action against his former school. He was fired regaridng his treatment of a transgender student.
Previous articleThe Prince review; Abigail Thorn’s wonderful debut as playwright
Next articleTribunal finds trans woman was discriminated against