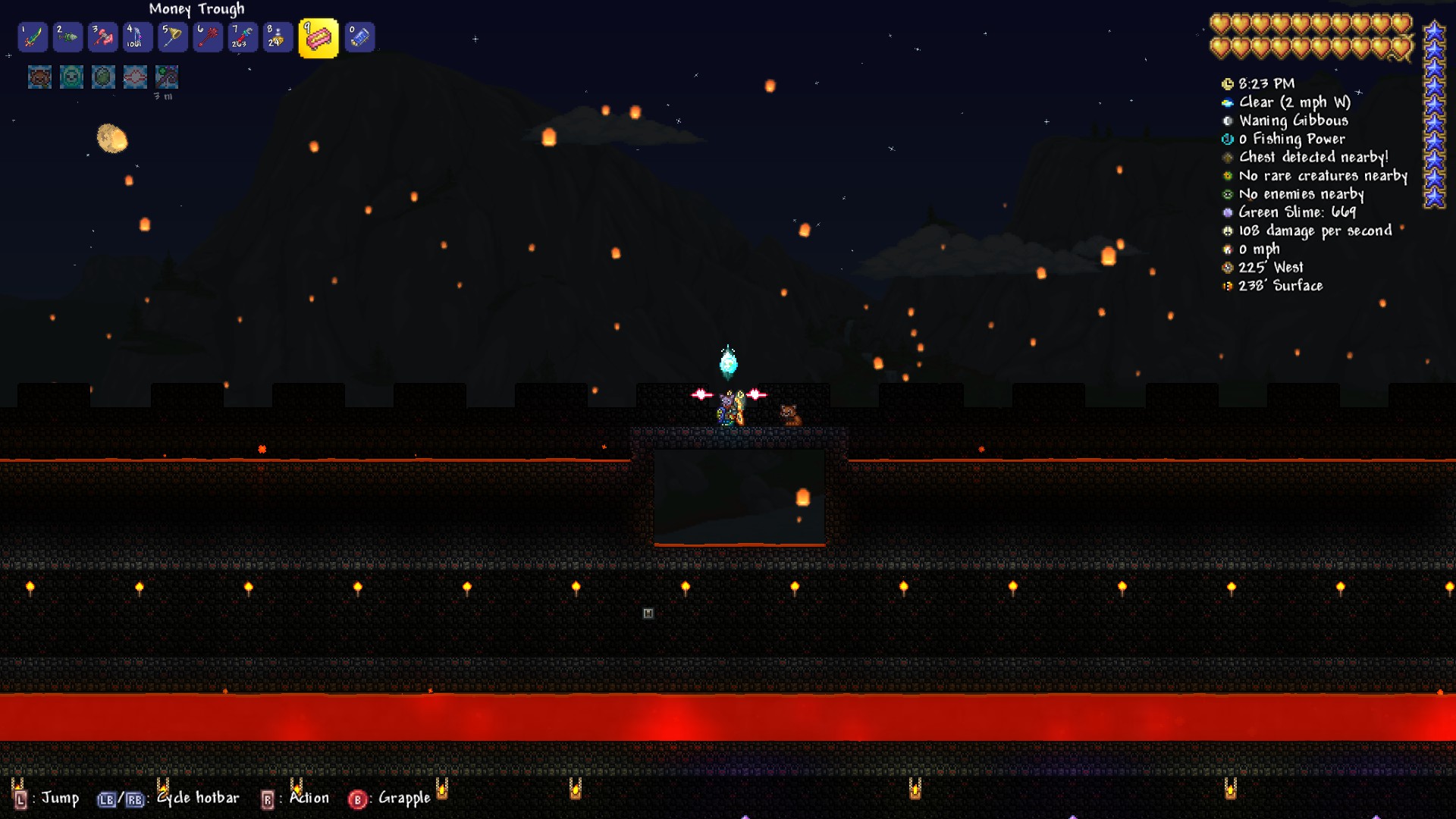 We took a poll on Twitter and Terraria won by a landslide! #TransWritesGameNight’s first game is officially Terraria and so here’s a quick guide on how to get started.

Terraria as a game looks quite simple and, in theory, is quite simple. But there’s a lot too it and it can get overwhelming quickly. That’s where the wonderful Terraria community come in, who have spent years curating the wiki and creating content on YouTube.

All of these creators have personally been super useful for me in my own Terraria journey. Though I still haven’t completed the game and defeated the final boss; hopefully #TransWritesGameNight changes that! But I’m getting ahead of myself, this is a guide on how to get started, not how to finish!

Getting started in Terraria isn’t too difficult. For #TransWritesGameNight you will need to create yourself a classic mode character and that’s about it. Aesthetics at this point don’t matter too much as there are tonnes of ‘vanity’ items in the game and ways to change your appearance.

Dropping into a Terraria world will see you placed at the center of the map on the world’s surface in a forest biome. Your first task should be to build some very basic housing as you’ll need it to defend yourself from the creatures that roam around at night. For now just a box with doors will do fine!

Now you have a safe space at your respawn point, you need to try and make your body safe. Early game armour is usually wood but there may also be pumpkins still around if we play during the Halloween event. With your home and body secure, the world is your oyster! Start exploring and gathering resources.

Before you go exploring its a good idea to kill a few slimes on the surface to gather gel. This will allow you to make torches that are going to be extremely useful when you get underground.

The first things you’re going to want to look for are the materials to make a workbench, an anvil and a furnace. After that you’ll want to upgrade the tools and weapons you start with. Exploring will also lead you to find potions, materials and even loot chests to further ‘level up’ your character.

One of the key items you’ll find in chests are accessories. You can wear these on your character alongside armour to increase things like your characters movement speed and – in later parts of the game – even fly. Two accessories I recommend hunting for in the early game are Hermes boots to increase runspeed and a lucky horseshoe to negate fall damage.

While exploring caves and caverns you should also keep an eye out for gems. 15 gems and a chain make a gem hook, which can increase your manoeuvrability in caves a lot in the early game. Grappling hooks are also really useful during boss fights too.

Its a good idea to also look into classes. There’s no point in the game where you have to commit to any one playstyle and I frequently find myself swapping between the classes depending on what I’m doing. But it is certainly good to have gear goals and work towards them. The classes are melee, range, summoner and magic.

I love summoner stuff, its very fun to have minions! But its definitely a squishier class than melee which can be built out to tank a lot of damage. That and options for summoner in pre-hardmode are a little limited, so I will more than likely lean more heavy into range until then.

Before #TransWritesGameNight progresses the world into harmode its a good idea to have already built several ‘Hellevators‘. These are tunnels from the surface straight the way down to the bottom of the map. I build mine about 6-8 blocks wide, though they only need to be 3. This can be done manually, with a pickaxe or at great expense using bombs.

The final tip; boss arenas. Terraria has a lot of bosses and building boss arenas using platforms is going to make them a lot easier to fend off. Platforms are a block you can drop down from and jump up to. With long horizontal lines of them in combination with your accessories and grapple hook, you can easily run circles around many bosses!

That’s everything I think you need to know for #TransWritesGameNight to get started in Terraria for pre-hardmode. I’m going to spend the next few weeks organising everything on the back end and figuring out how to rent server space for a dedicated server. I will announce more details via Twitter as I have them.

If you’d like to donate to help cover the server costs please feel free to sign up to my personal Patreon.

6 months of Trans Writes; Thank you everyone!