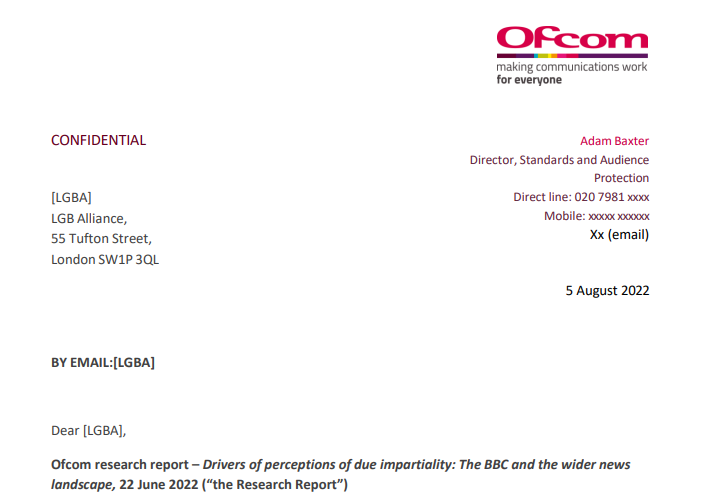 At the heart of everything that is going wrong in Britain, lies 55 Tufton Street, so it should come as no surprise that the LGB Alliance have also found a home there.

The LGB Alliance have a registered address on City Road in London, yet for some reason, correspondence from Ofcom, obtained through a FOI request, shows the independent communications regulator replying to a letter sent by the LGB Alliance at 55 Tufton Street.

Wee Melter is a reader-supported publication. To receive new posts and support my work, consider becoming a free or paid subscriber.

Why would an organisation with one address need to use another based almost four miles away?

The most obvious answer to this is that someone at 55 Tufton Street sent the letter on their behalf, using their enormous clout to help them secure a meeting with Ofcom. [read Ofcom’s reply here]

Wonder why Ofcom would be writing to the LGB Alliance at 55 Tufton Street 🤔https://t.co/1myqovnqIU pic.twitter.com/qCYjcYXl10

Those outside the UK may not have any clue why this address is a problem.

Even many inside may not have come across it before, although it has featured on the news more this year than ever before. Still, despite the massive hand they have played in the absolute worst of British politics over the past 12 years, the media have been keen to avoid turning the spotlight on them too much.

Tufton Street’s latest, most public contribution to Britain was to groom and place Liz Truss and Kwasi Kwarteng in Number 10 and 11 Downing Street, respectively. Tufton Street’s economic ideology is why you are paying much more for your mortgage or rent now. They are directly responsibly for the massive ‘hole’ Truss and Kwarteng blew in the UK’s economy.

As drivers of Brexit, Tufton Street is usually described as the home of multiple ‘right-wing think tanks’ but in reality it is also where the creators of the ‘culture wars’ reside and where you will find the closest links to the American side of this nightmare.

Groups based in Tufton Street have the ear of the UK government and right-wing media. They direct policy and issue threats. They are, in short, the perfect partner for a group like LGBA which will, apparently, ‘get round to helping LGB people’ soon.

These groups have ties to the Koch Brothers and Koch Industries and Robert Mercer in the States. They also have ties to far-right parties from Sweden to Italy.

In addition, Migration Watch UK, that wants lower migration, and the New Culture Forum, which says it is “challenging the cultural orthodoxies dominant in the media, academia, education, and British culture in its widest sense,” also call 55 Tufton Street home. NCF have published writing by Julie Bindel, although Owen Jones has also spoken at one of their annual keynote Smith Lectures.

The leap from the LGB Alliance to Tufton Street is not a hard one to bridge. Baroness Nicolson, who has not been shy with her opinions on trans people, used to be a director of the Global Warming Policy Foundation which still works out of the Georgian townhouse.

But, in reality, there are dozens of ways they could have got their foot in the door, such is the overlap between their organisation, the transphobes in the Tory party, the business world and the media.

It is not surprising to find out that the LGBA are linked with these people, even if it is very surprising that we’ve actually seen direct evidence to confirm it.

It is likely this could be the closest we come to finding a smoking gun showing how the GC anti-trans movement is not only funded by right-wing think-tanks, but allowing them to direct action.

Wee Melter is a reader-supported publication. To receive new posts and support my work, consider becoming a free or paid subscriber.